Their Eyes…Instead of My Shoes

Their Eyes…Instead of My Shoes 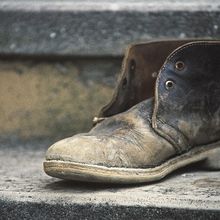 Flashback: I had just come home from Spike's very first surgery to his back.  It was 5 hours long because he woke up during surgery, spooked the neurosurgeon and tried to get up off the surgery table after being in a hit/run accident.  I was pregnant, tired, drained and already exhausted after Day 3. It was 11:30 at night.

I went to the answering machine to pick up my messages.  "Beep!  You have one message.  Hi Laura I just heard what happened and you must call me by 8pm or I will never speak to you again.  I don't care what kind of day you had, you have to call me or I will never speak to you again!"   I sat there stunned.  I didn't know what my response should have been.  But sleep and exhaustion were coming on me fast and I decided they could wait till I saw them next and went to bed.  I did see that person later...and true to their word they wouldn't even acknowledge me. I realized I made the right call.  Cold.  But to me compassionate people have an understanding and forgiving heart. Obviously that person didn't have one.

Present Day:  It's Sunday morning and my daughter made a herculean effort to get up early as she wanted to go to church.  We hadn't attended in 3 weeks as she had acquired her 7th version of strep since March before the year end. Our challenge was that we discovered that our new pup has severe separation anxiety (escaped a wire crate and plastic crate 4 times) so I had to be creative on how I could pull off both concerns successfully.  I decided we would go to the pet store first and get some "calming tools".  From there I went to the church and sat in the car with the dog so my daughter could attend, making her happy and the dog safe.

That night I got an email from someone furious with me that I hadn't been attending.  They stated they loved me but these days but "don't have time for long or short phone calls with anyone other then family" yet were concerned that I "stayed in the car with a dog" instead of attending church.  Oh! and she didn't mean to pry or sound accusatory.

Very politely I answered back explaining the new pup's concern and my concern for its safety.  I also explained that "I am not married, not divorced, don't have any teen-aged children, and don't have any family or anyone for that matter to back me up when I need access to something like that.  So sometimes I am simply going to do stuff that doesn't make sense."

I signed it "All's well and no worries."

I looked at it again and remembered that moment with Spike.

Yes, I did....I took care of my family first and have no regrets.

(But a little pained because I was judged through their eyes... instead of my shoes.)

I admire your patience.

Wow, Roaring Mouse. I am speechless. People's lack of compassion and reality is mind boggling to me. I will forever try to remember to look at people through their shoes. Thank you for sharing.

People can be so terribly judgements and try to make it all about THEM. I glad you wrote this post to us who have been there, who are there and who understand. Keep roaring!