ejourneys
My partner's thinking pattern today is the main reason I use a handle here and keep her identity a secret. It's why I talk or write openly about caregiving in some places but not in others. There is some overlap here and there, but for the most part my caregiving life and the rest of my life go into different online boxes.

Bottom line: I don't want to do anything that gets her more stressed and paranoid than she already is, when that part of her disorder kicks in. Today has been one of those days.

It's two days after her follow-up MRI (more on that in a bit), which has already tripped several of her sensitivities. Those sensitivities launched our talk sessions yesterday.

Today the doorbell rang a bit after 3 p.m. My partner was asleep on the floor close to the front door, which she keeps covered with a blanket held up by a wood board and a crutch (for "insulation"). I wasn't about to step over her to move all that out of the way, especially since she had slept through the bell.

My partner awakened a few minutes after the bell, which had rung only once. I wanted to take a peek outside to see if anything was there. My theory is that someone was looking for work. In those cases, sometimes they leave a flyer behind.

My partner's theory is that one of the neighborhood youths knows about her MS diagnosis, has also read that women with MS lose their mental capacities as they grow older but still have a sex drive and may even become promiscuous, and therefore the youth wants to have sex with her.

This is a variant on her "kids spying on the house" paranoia. Apparently she'd read an urban legend somewhere that said four women with MS were trolling the streets for sex. She'd also apparently read 30-year-old theories about MS that linked the disorder to a certain dementia/promiscuity mix. Her thinking pattern:

1. There are five (she gave the specific number) male youths in the area who behave badly. (I have not personally witnessed this behavior.)
2. These youths are aware of the purported urban legend, and they are also aware of the purported 30-year-old outdated theories about MS.
3. We live in a small town, so they also know (automatically!) about my partner's diagnosis.
4. They want to have sex with her!
5. Therefore, one of them rang the doorbell a bit after three this afternoon, to see if she was up for it.

Once, a couple of years ago, it was a couple of cops who asked me questions like, "Do you live here?" and, "How long have you lived here?" (We've lived here since 2003.) That was a little creepy, but then again, the place looks pretty shut up. We haven't had any kind of social call in something like seven years.

There was no flyer when I checked outside.

A guy had stopped by a couple of years ago looking for work. My partner has suspicions about him, too, and was disappointed we didn't get his name.

Today she prefaced her suspicions by telling me she was going to talk about "a cartoon metaphor." I had no idea what she was talking about until I gently coaxed her to get to the point she was trying to make.

Afterwards, I offered my theory that it might have been someone looking for work.

She returned to her five points, above. She concluded it wasn't anyone proselytizing, because "if it were, they would have rung the bell twice." (I agreed with her there.)

I said, "I think that maybe you're feeling a bit scared and vulnerable right now, because we don't know the MRI results yet."

She said that was certainly part of it. But she still thought there were sexual predators out there wanting to have sex with her. Actually, "predators" was my word. She said she wasn't sure they were predators, because does it make you a predator if you think your intended target wants to have sex and doesn't know any better? (Her question, not mine.)

During all this time she appeared calm. Her speech pattern was hesitant but urgent, fairly monotonal, and intense -- what the neurologists we've seen call emotional lability. She didn't appear scared. Her tone of voice sounded as though she were going through the steps of an ornate mathematical equation, with multiple repeating calculations arriving at the same conclusion.

I asked her, "Is there anything you need to hear from me, other than acknowledgement of what you think is happening?" She said no.

We finally made some headway when I suggested we could check Snopes to see if the urban legend she'd heard about was addressed there as being true or false. She liked that idea very much. (Yay!)

I haven't found anything that comes close to the urban legend she was referencing. She didn't want to email me her notes because she was afraid the word "sex" might get logged somewhere online, where someone in the neighborhood could see it.

She later came up with a new theory, that maybe someone from the water utility rang the bell because they were about to remove the tape surrounding a repair job they had done on the water main two years ago. "But ringing the doorbell just for that would be unprofessional," she added.

I took a walk around the house and found the homeowners' association telephone directory in our mailbox -- the sort of thing I suspect wasn't delivered by USPS. My partner accepts that this delivery was the likely source of our doorbell ring, and she has written a note with today's date, recording the phone book delivery and the fact that it produced just one doorbell ring.

(The tape from the water main repair is still in place.)

Back on Wednesday we made the 75-mile drive from home for her follow-up MRI -- in at-times torrential rain and then in rain and darkness during the 75 miles home. My less-than-a-year-old driver's side windshield wiper was acting up, not terribly so but enough to make my partner nervous. A couple of times I had to ask her to stop gesturing so that I could pay better attention to the road.

But we arrived without incident -- and now that clinic has a Caregiving.com flyer! :-)

When the nurse asked about my partner's diagnosis, my partner began describing her experiences back in 1982. I interrupted as politely as I could and mentioned the diagnosis of MS-that-acts-like-TBI that we had received this past December, which postdates her MRI from last year.

My partner has come up with new theories since that diagnosis, and also since her blackout last October from her diphenhydramine overdose. She launched into those. I honestly don't know where filling in the gaps ends and rewriting history begins. My impression was that the nurse wanted to know if anything new had happened since last year's MRI, so I tried to keep us focused on that.

Knowing my partner's head would be inside a claustrophobic cage, the nurse asked, "Will you need sedation?"

After the MRI, my partner was a bit upset with the tech (and didn't tell me until after we got home) for a couple of reasons, one of which I want to get further clarification on. I had sat in the test room, several feet from the MRI machine, so I heard the tech's voice through all that ear protection.

He asked her what kind of music she wanted to hear. She couldn't make up her mind.

At one point he suggested, "You should like the easy listening channel," which I heard as a friendly suggestion and my partner heard as a "you'd better like this" directive. She called his suggestion "tension-creating." They finally settled on the university radio station, whose frequency number I now have written down for future reference.

At one point I pulled up several Internet radio stations, because by this time my partner really wanted to know what "easy listening" meant. I said, "Ask ten people what it means and you'll get ten different answers."

After I played several stations for her, she renamed "easy listening" as, "music to make the angels puke." :-)

Her other source of upset -- which I want to follow up on -- had to do with the movements of the MRI table. She had one series of scans without contrast, followed by another series with contrast. Injection of the contrast medium meant sliding her away from the magnets.

She already had one blanket on (she had worn her jacket on top of her gown until the last possible moment) and now wanted a second. Sliding the table back into place took a couple of attempts: stop forward motion, back the table up, try again, back up again, slide fully into place. This hadn't happened last year. My guess is that the blankets had interfered with some of the table movement, but I want to get clarification on that.

Those extra movements had upset my partner, but she didn't mention her upset until the day after the test. How fast had she been traveling? How many gee forces?

She's filled a page with calculations.

Overall, she was more fidgety this year than last. Several times the tech reminded her to keep still, but he also reassured her that they were getting good images. She thinks the wedge for her legs was lower than it had been last year. She felt as though she were cramping up more. She now thinks she needs to eat more fats before the test so that her muscles don't cramp up. (This sounds plausible to me. Her metabolism has always seemed to me to be very fast, though blood work has shown normal thyroid activity.)

Or it could be the MS, or the fact that she's been exercising more lately.

We had a nice dinner, during which time my partner focused on drinking water and doing her best to eliminate the contrast medium from her system.

That increased her need for bathroom stops on the drive home, coupled with her inability to pee. During one long stretch of country road (in between drizzles) I pulled onto the grass.

She apologized for doing so much kvetching. When I assured her that was okay, she asserted, "I'm expressing remorse. That's an emotion!"

Before her MRI, she had been explaining to the nurse how she doesn't want to use absorptive briefs because she believes they give her UTIs. (I will not reproduce her detailed explanation of how that happens.)

But her urges during the drive home gave me an idea. We have a bunch of briefs left over from her back injury in 2008. I suggested she could try wearing a pair over her regular briefs. True, the regular briefs would become soaked and they couldn't wick that moisture away from her, but the arrangement might be the lesser of however-many evils in a tight spot.

She carried out her first such experiment in the safety of our bathroom yesterday and liked it. Yay! :-)

Below: I took this photo of I-didn't-know-what before we left for the MRI. These things have been popping up around our oak trees. From a distance this looked to me like a really cool insect or a weird snail. Speaking of theories... 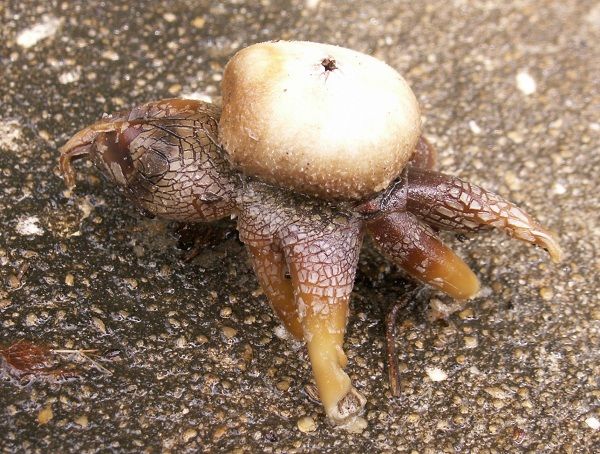 Recently I learned that it's probably a Barometer Earthstar Fungus (love that name!).

A couple of days before the MRI, my partner came up with this, which I thought was quite insightful: "The more I make up answers, the less baffling it is. So I'll keep making up stories."
:-)

Then there was our conversation early Sunday morning, concerning a package of fake meat:

Partner: "I'll eat X. You'll eat X minus Y."
Me: "We're talking about textured vegetable protein, not a quadratic equation."
Partner (smiling): "How do you know?"
:-)