There Is A Place Called Wit's End

There Is A Place Called Wit's End 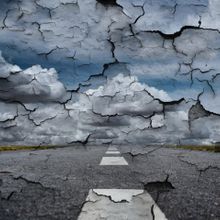 So here we are, a charming little two-bedroom ranch in a small Midwestern city on a street now known as Wit's End.

How are we supposed to cope?

She can't get up out of a chair or bed by herself right now. So she stayed in bed longer this morning and OF COURSE the "overnight" incontinence underwear gave out and the bed was wet. So more laundry. And now I have to search for a waterproof pad for the living room chair because that got wet yesterday.

All day today I've had to help her get up every time... to the bathroom or wherever she wants to shuffle off to. Help her up and off the toilet. This is all sudden. Since we were at the neurologist last Friday we've pretty much gone from bad to worse. And yet they keep saying there's no UTI. Despite the fact that everything points to one, the tests keep coming back "clean".

I didn't even mention church today. She can hardly walk there is no way I can get her down the porch steps to the car.

Keep in mind that the Doctor doesn't want her to be left alone now. Okay, I can see that. Problem is I can't get a confirmation from the agency that she can work 9:30 to 2:00 for the rest of the month. Apparently the scheduler went home from work early on Friday and no one worked today. So for Monday I have NO IDEA whether or not the girl is coming at 9:30 or 11:00, staying to 1:00 or 2:00. We have a doctor's appointment on Monday to follow up on the ER visit of Wednesday. But what am I going to find when I come home to get her for that? Is she going to be ready or is she going to be on the floor?

I also still do not have anyone to sit with Mom in the afternoons. A friend contacted her church, they have a ministry for helping with this sort of thing. Talked to the coordinator today. She doesn't think she can get just one or two people for the week - but could get a different person every day. That will not work. You can't spring people on Mom. Took her over a month to get used to the caregiver.

Other thing... By increasing the caregiver's hours we will exceed Mom's monthly income. By a lot. Five days a week at 4 1/2 hours a day at $20.50 an hour every week is a lot more than Mom gets from Social Security. So yeah, we can do this for a while BUT in so doing we're spending down her money which will kick her over to Medicaid BUT THEN by the time I need to place her somewhere she'd have to go directly to a Medicaid bed and there are very few of those around here, let alone in places rated well by Medicare and the state of Ohio.

So basically we are screwed.

Keep in mind that I have been to every local agency, contacted my own church and because we aren't either rich enough to afford private pay services indefinitely or poor enough to be on Medicaid from the get-go we are lost in the wasteland of how screwed up our healthcare system is in this country.

She's been in a good mood all day. Until about a half an hour ago when she decided it was time to put on PJs. The refused to keep her incontinence undies on. So that was a fight. I won. Tried to get her to put her bathrobe on so she wouldn't be cold. That was a fight. She won. I still put it on her lap in the chair. I won that one.

I did get to the bank today to find out how much was left in her IRA. Not much. All accounts combined she has less than $20,000. So if she were placed today she could MAYBE be private pay for three months IF all accounts were completely drained. But then there'd be no money to pay her credit card bill off, or her medical bills. And - selfish as it sounds - I would lose the rent money she pays me to help with the added expenses. And I still struggle to get back on my feet after over a year of unemployment and underemployment. PLUS the whole keep her in the house as long as I can. But how much longer can I? If she's going to be a high fall risk it isn't safe here.

And since she isn't supposed to be left alone, how am I supposed to run necessary errands, get groceries or attend committee and school board meetings? Does this mean I am trapped in this house now?

How are we supposed to cope?

I'm in the same type of situation too with my Mom. Hang in there. I'm in debt, flat broke and have not worked in 5 years. I can not get paid to be my Moms Caregiver because her IRA has to be spent down. I feel like I'm in some type of time warp holding tank and If I make it out alive from this Caregiving struggle, the next struggle will be figuring out how to clear up the Mental and Physical path of stress that goes along with it and fix things with myself. I get my Mom out basically everyday in a Transport Chair for a few hours, but I've been trapped in my house 5 years now for the most part.

Thank you for continuing to share your story. Using words like \"challenge\", \"battle\", struggle\", \"fight\", are all pretty lame when it comes to this. The endless loop of lose-lose seems to overtake everything. Sometimes you just have to jump because you're forced to, and the rest comes clear. No one wants to make the choices you're having to make. We get it. We're behind you.

I'm so sorry for what you're going through. You're facing all the things that scare me right now. The thought of being trapped is terrifying, and you need help beyond just your working hours. I left my mom at home while I went to work before she had the stroke, but that would not be an option now. I hope you find a solution, whether it's hiring additional home care (even if it's against her will, and I know how hard that kind of thing can be!!) or placement in a facility. Best of luck to you, and I hope tomorrow will somehow look like a brighter day.