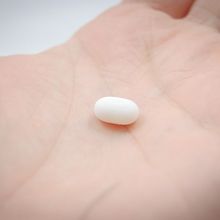 I don't have any news to report, but I thought I would just post an update of what these days are like.

Mom's been having a lot of bladder problems - mainly urgency that sometimes ends up as incontinence. Fortunately, we discovered Poise pads and they seem to work very well. Right now the problem is much worse than usual because her doctor put her on a water pill to lower her blood pressure. The med she was (and still is) taking wasn't doing enough good and her pressure was so high at the last appointment that she was at risk of a stroke. But the doctor said, "Consider the next two weeks a kind of out-patient hospitalization where you have to stay within five minutes of a bathroom at all times." After two weeks, the effects of the diuretic should have gone away. If they don't, we'll try something else.

Because of the "out-patient hospitalization," I cancelled her follow-up with the neurologist. I asked if I needed to reschedule it right away or if I could just wait until she has the psychoneurological testing in January. Unfortunately, the office called back my mom instead of me, so that was confusing and upsetting to her. She had no idea why she was seeing a neurologist, and she thought maybe it was related to the fall she had this summer. I had to explain again that we were investigating her memory problems. I'm glad the testing isn't until January. She hates and fears tests.

She commented that she used to have a system for writing down her appointments, but now she never has any idea when her appointments are because I'm in control of it. We talked about how all of my help has the disadvantage of making her less capable of doing things for herself as she loses the habits. So much of caregiving seems to be finding the right balance.

Another example of the above is that I'm now in charge of her meds. She was back to doing it herself, after the accident, but each week I would check and discover something missing. Now she says, "I haven't done my pill caddy in so long, since you've taken over, I've just gotten out of the habit." So long = 2 weeks.

Every single day I ask her what she would like from the grocery store, and I go through her fridge and pantry to see what's missing or low. I try to make sure we go together once a week, but I also try to do regular quick trips to keep her from having a reason to drive herself. She is sure that she is still perfectly safe to drive, but she is willing to let me do about 95% of her driving now.

But I am trying to be very consciously grateful of the fact that she doesn't need constant supervision and I don't need to do night-time care. Losing my night's sleep is one of my biggest fears about this caregiving gig. I could handle a sleepless night better when I was young, but it seems really hard for me now.

I'm enjoying my job these days. I two good groups of students - I am so fond of them, and I don't feel any pushback or resentment from either group even when the work is hard. I really enjoy the tasks of work - making a rubric, making lesson plans, giving feedback on their papers. . . I am also trying to be consciously grateful that I can still do that.