0
I was just thinking back this past week to ten years ago. It was ten years ago this week that my husband had his second cardiac bypass and additional/unexpected vascular surgery. The bypass was "planned" for; the vascular, not.

In the five years since his first bypass surgery and the whole start of this journey there were major changes for our family and not just with him. His mom had a major heart attack resulting in bypass surgery (at 88 years young) followed by a major stroke which sent her to a nursing/rehab facility and then dementia, nursing home abuse, additional cardiac events and death (finally in 2004). My mom literally dropped dead in 2003 from a pulmonary embolism. Our three oldest children were out of school and employed; our two youngest had recently requested to return to the public school system after a period of time being home-schooled. Where I had depended on my two mothers for a lot, they were now gone and I had to lay extra burdens on the older three.

My husband was ready for surgery and actually prepped and set to go down when his surgeon (who had done his first bypass and his mother's bypass) stopped everything to request a carotid ultrasound. This angered my husband because he was anxious to have the surgery over and done with but he went down for the test. A bit later, a young female doctor came in and told us his surgery was being delayed by a day because both of his carotid arteries were severely blocked. She was a vascular surgeon and was going to partner with Dr. A and they would do a tandem surgery the next morning. She would start by cleaning one carotid artery and when she was finished, he would do the bypass surgery.

I should back-up a bit on this to explain. The surgeon who was doing the bypass -- as I said previously -- did his first bypass and my mother-in-law's bypass. He was (is) a well known and published surgeon in his field. He has developed new techniques for thoracic surgery and more. The man is good at what he does and he is a good man as well. He was devastated when my mother-in-law had her stroke. He actually avoided me for a day or two, finally getting up his nerve to come and profusely apologize to me for what he felt was his fault. We never held him to blame for anything and were glad that he took a chance on trying to give her more time with us.

But it was because of my mother-in-law's results that he decided to do the ultrasound of my husband's carotids and thankfully find the major blockages. As he said to me post-surgery, had he not done the ultrasound and subsequent vascular surgery my husband would have had a massive stroke in surgery, if he even survived. Yes, that's how critical things were.

My older children were getting the younger ones to school the morning of surgery, and they were taking care of picking them up and preparing supper. I was up at 4 a.m. and at the hospital before 5 a.m. since they were taking him down to surgery before 6. I had my things to keep me sane (knitting or crochet, a book, a puzzle book, etc), a few little snacks and then all his belongings since he would be in post-op for at least 24 hours and a different floor and room afterward. I prayed as I walked across the street after parking, prayed as I do for God's will to be done, and the grace to accept if His will was not the same as mine. I also prayed for strength for the children and myself. After I sent him off to surgery, I stopped at the chapel to pray again and then went to the surgical waiting room and hunkered down.

I slept on and off, using my jacket as a pillow and my scarf as a cover. Iwent to the chapel several times to pray and had brief conversations with others in the room. Finally Dr. Lucy came to me -- the carotid surgery was done and her assistant was closing up the incision. Dr. A had already started the bypass surgery. She told me my husband did well through the first surgery and to hang in. I was grateful and after thanking her, went to chapel again to say thank you and pray again. A friend from church stopped by to check on me and offer food, drink. I guess I looked a real mess because other friends came later that night to check on me based on what J had told them. (They actually said to me, You don't look THAT bad.)

Finally, about seven to eight hours after they started, Dr. A came to me all smiles. Everything had gone well and he expected a great recovery. His assistants were still closing up the surgical site and doing the end of surgery details. So he told me I could probably see him in recovery in about an hour. I was ready to hug him but you know, they kind of don't like that. But I did thank him profusely and after he left, I went to chapel to pray a prayer of thanks, stopped at the ladies room to me myself look respectable and then waiting until I could get my few minutes in recovery with him.

The differences from the first surgery to this second and third one were evident from the start. He had a very hard time coming out of the anesthesia, taking many more hours than the first time around. He also took much, much longer to be able to breathe on his own. These things concerned me but the nurses assured me that both were within the realm of "normal". Once he was out of recovery and in his room I started seeing the personality changes. After the first surgery, he was thankful to be alive and anxious to do everything the doctors and nurses asked of him. Even in pain, he would tease and flirt with some of his nurses. This second time around, he snapped at all the nurses. He complained about everything and he even yelled at me. More than once I took my phone and a magazine and walked out of his room and went to the dining room or the atrium when he yelled at me so that I wouldn't snap back and to calm myself and tell myself it was just because he was in pain, or tired or anything else. I always expected him to apologize or something when I got back but it never happened. It seemed now everything was "my fault".

Again, I thought much of this was from pain, medication, the surgeries and so on. But long after we were home it continued and sometimes got worse. I knew it was not a temporary thing.

My lay perspective on it is that somehow the long hours under anesthesia did something either to his brain or to his brain chemicals that altered his personality. I can find supporting evidence on the web (and I do read critically) on it but the problem is finding doctors who either know this, have heard about it or experienced it with other patients or who are willing to read some of the evidence and think a little "outside the box". I know I mentioned some of this to his primary care doctor and all he asked in response was: 1) Did he harm either me or the children and 2) did I feel we were in danger from him. Since he hadn't harmed any of us (I make very sure things never get to a point where something like that could happen) and I try to diffuse the situations so everyone is comfortable, I had to answer him no on both counts. Since my answer was a "no." His only response was if anything changes to let him know.

So we have been in this new leg of the journey for ten years now. He has kind of "leveled out" personality wise. Sadly, the children (all adults now) stay in their rooms and don't interact with him that much. When they do and he gets "argumentative" they walk away and go back to their rooms. He has said some really mean things to them at times. When I talk to him about it he seems to not even realize he is being that hurtful and nasty. I don't know which hurts more -- that he says them or that he doesn't remember saying them.

So I put on my happy face and "Pick out a pleasant outlook, Stick out that noble chin; Wipe off that "full of doubt" look, Slap on a happy grin! And spread sunshine all over the place, Just put on a happy face!"* 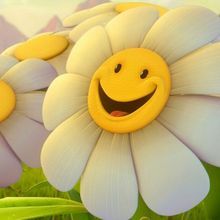 *Lyrics from Bye-Bye Birdie - Put on a Happy Face