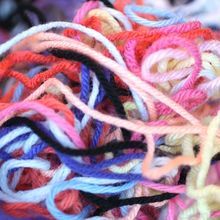 So, the challenge with our youngest daughter turned out well on Tuesday. With a kind and generous prosecutor as well as a friendly judge, her violation was downgraded by speed (so only two points on her license as opposed to four) and the minimum fine of $100, doubled though because of the "zone" it was in. With court costs and fees, it was just under $240. Plus, the judge was agreeable to a payment plan so we are all good. She is thrilled that she didn't lose her license -- as am I.

Now the next challenge for this week is his angiogram tomorrow. I can tell he's already nervous about it. Today he was announcing how Heather (the oldest daughter with the panic/anxiety issues) had picked him up last time. Which really kind of hurts because I picked him up the last time. I distinctly remember walking through the hospital and thinking to myself how I really hated seeing patients lining the hallways of the regular floors, finding him and then going to the parking area to get the car to bring him home.

But he insists Heather brought him home and basically calls me crazy for saying otherwise.

Tomorrow, he "should" be pretty "okay". I shouldn't get snapped at, or yelled at prior to the procedure. I'm hoping he is given some kind of sedative so that after the procedure he is a bit "out of it" and I don't have to deal with (what could be) his terrible attitude. I also hope they keep him overnight, that way I know he won't do anything to pup his plug or do harm to himself just because he won't follow doctor's orders.

I'll pack my "survival bag" tonight with yarn, hooks and needles for both crochet and knit projects (if I can concentrate), my tablet and Nook, chargers for both and my phone. Healthy snacks, tea bags (although last time the hospital had tea/coffee for those of us waiting) and definitely some chocolate! There will be food at home for whoever is home for dinner that needs to eat and the kids are all set to take care of critters and themselves.

Is it terrible that we can fall into preparations for this so easily?

Thank goodness to have the court date behind you! \r\n\r\nI hope all goes well tomorrow. Keep us posted as you can. And, it is odd that we prepare for a hospital trip like we're getting ready for a day trip. Ah, the life of family caregivers. :)