Time to Vent. Time for Memories

Time to Vent. Time for Memories 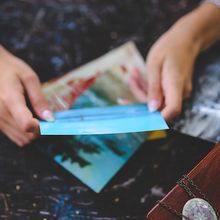 My mom is asleep. Finally.

Today was not a good day. Well the whole week was horrible but what can I do. My mom is under this injection trial. I honestly thought she was fine and I wouldn't have to worry about stuff like this anymore. So this injection is to help control her thyroid levels. The tumor she has is rare and i guess her thyroid effects the tumor. Her endocrinologist she has had since 2008 recently moved to her own office.  Before the new injection (Signifor), Gloria had an injection similar to Signifor, but of course after a year  it stopped working.

We recently finished the last month of the Signifor and we went to see her doctor on Monday. The past three months were horrible. Seeing her like that was a total flashback to my mom when it all started. She was exhausted from doing nothing. I had to wake her up so she could eat and take her pills. We talked about all these side effects to her doctor, and basically he will find out if it normal.

Well, during this trial I had to keep on checking her blood sugar. One main side effect that he knows of is high blood sugar. Her highest has been an average of 213. On top of all her health issues now he is requesting more medication to help with her high levels. I felt like he kept on asking what I want to do next. I had three options. One was the Signifor injection that comes with diabetes. The second one was a pill that acts just like chemo therapy. She already had radiation. Lastly, was another surgery to try and take out more. She had some blood work done after the first month and those came back normal. I don't know if we continue the Signifor or stop it. I have a feeling that her TSH levels will be under control. Therefore he will want to continue it. I don't like seeing her like that. It brings back so many bad memories. Ever since my father left and she was 100% under my care, she has made it so far. My mom has so much faith it has brought her so far in life. She is strong, which is why I can't stand seeing her like this.

On February 29, 2008 she passed out  I remember it like if it was yesterday. Since I was so young I didn't really pay much attention to what was actually going on. I do remember some parts of her healing process. She was in hospital for months. Unable to get up on her own. Then I found out what a catheter was. I remember walking in the room and seeing tubes coming out of her mouth and a bag full of pee next to her. Then after a surgery I saw her bald. Then she lost her eye.

I've always been the person that hides their emotions. So I had to stay strong and walk into her room with a huge smile. I used to lay with her and watch TV. One of her surgeries I skipped school to wait for her to get out of the O.R. My father was there and my sisters. I had on these bright green pants on. At the time I was into Sharpies. I colored on everything. As I was waiting for hours i doodled on my new green pants. I was so nervous watching everyone's reactions. In my head i was trying to prepare myself for the worst. After the last surgery my mom had a stroke during the operation. That is why she is paralyzed only on her left side. She was not able to move at all. A few months after that she started therapy. She had to practice walking all over again. I know that when she saw me in the room each day she became stronger. She used to randomly laugh and her left arm would tremble. At this point, she was able to get out of bed with assistance. I used to take her all over the hospital in her wheelchair. I thought it was the coolest thing. After that she started a more advanced therapy. They helped her physically and mentally. I sat in a room with this lady named Tiffany and my mom. She asked my mom a lot of questions like how to do laundry. One certain question that got to my mom was how to make green chicken enchiladas. Tiffany was writing everything that my mom was saying. Gloria got so frustrated with her because she wanted to "steal" her recipe. Till this day my mom is still frustrated with Tiffany.

The day she came back home was exciting. My mom really wanted to get out of the hospital. This house had two stories and all the rooms were upstairs. She slept on the couch and i was sleeping on the other one. In the middle of the night she woke me up because she was crying. I opened my eyes and I see my mom on her knees and pee all over the carpet. I yelled for my father to come down and help get her up. All she wanted was to go to the bathroom by herself. I think that is when everything soaked in for her. After some time she went to a nursing home. Then she came back. She was able to get up onto the wheelchair by herself. Then we moved to a walker. That was a big change for her and a huge improvement. She did have a leg brace to help keep it straight. After the walker, we moved onto a quad cane. She loved it. Not to balky, and easy to carry. At this time we only practiced with the walker and cane. She was still using the wheelchair. About three years ago I got her to use a single cane. Then my father left us and I had her stop using the wheelchair.

We moved on and away from those bad memories that we had with my father. She could not be any better. Now we live in a small house and she doesn't even use a cane anymore. When she used to have energy I would let her clean and cook. She has a lot of strength and faith to have made it this far.

One of the reasons I love to blog is that I'm reminded of how far I've come. I hope writing this post provided the same for you, Crystal. It's amazing how much you've endured and yet how far you've come. You are a survivor and a champion. \n\nI hope today brings you a beautiful memory and a moment to enjoy it.

This is just an incredible story of human resilience, human frailty, love, hope, determination, healing, and on and on and on. Thank you for sharing it with us here. When I read accounts like this, I am awed by families who stick together through such difficult times, and do it without complaining or acting victimized. Great job, Chrystal.