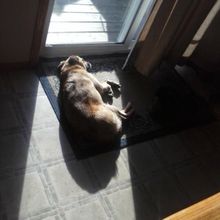 The picture I've included is of my little buddy Fred. He got caught in the sun and feel asleep. I know how he feels, I'm tired too.

Last week we met with home care in the city and I think we had some sort of a breakthrough. The nurse we met with was wonderful and listened to Mike's concerns and spoke mainly with him which doesn't always happen. Usually he gets ignored and they talk to me, but this time was different. The other thing I liked about her is she didn't give him much wiggle room in saying no to her recommendations. I think he's met his match, thank god!

Her recommendation was to get him in to home care in our county and start with a Unna's boot on his right leg which is the one that is most swollen. She feels that with the dressing his wounds will heal and the fluid should drain out of his leg properly. She also wants him to use a thigh high compression stocking once the Unna's boot has done its thing. He tried to argue that the last time he tried a thigh high it didn't work. Forget the fact that was about 20 years ago and things have changed since then. *sigh* At least she didn't back down though and said they would revisit it once the time comes.

He meets with the other home care group tomorrow at 2, although he wants me to come so he's going to see if he can move the appointment. We'll see what happens there. I think he is hoping they can train me to do the dressing so that he doesn't have to go to them all the time. Something inside me hopes that it is something they would prefer to do because I'm tired and not sure if I want more to do.

Hurray for Home Care Nurse! Anytime you can be relieved of an \"argument\" is wonderful! I do wish for you rest in the sunshine with Fred too! It does sound like some things are falling into place for you!

Chris, I am so happy you have found an ally in the home care nurse -- someone who advocates for you, just as you advocate for Mike. I hope you can get some quality break time with Fred. :-) I also hope the nurse's recommendations provide good results for you both.

I love your little bud Fred! Just soaking in those rays. I'm keeping my fingers crossed that this nurse keeps the upper hand with Mike and fights some of the fights for you. You deserve a little rest from that. Then you and Fred can lay in the sun together. (For a moment or two)