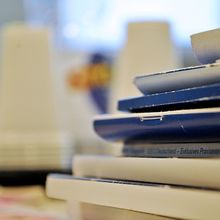 My mother had an appointment at a neurologist's office yesterday. She hadn't been there in four years but her migraines got worse so she went back. This time she saw a nurse practitioner she'd never seen before. The FNP seemed nice enough even though she seemed hurried. She asked questions about Mom's medical history and at times asked another question before Mom could get the first one answered.

I understand that medical practitioners are busy and pressed for time. However, not allowing enough time to get a clear picture of your patient can be detrimental. How can you treat someone properly if you're too rushed to listen? Or too rushed to do a procedure properly? She ended up giving Mom an Occipital nerve block to help with her migraines. I watched her do it. She didn't appear to have a light touch and didn't numb the area like Mom's doctor did when she had the block before. So, something that helped in the past ended up making her feel worse. Which could have been prevented if the FNP had taken a few extra minutes instead of rushing to get done. Not rushing would also prevent the patients and family members from not resenting the medical personnel. And keep a big, blonde viking-esque daughter happy.

And despite all the rushing we were still there two hours all together. Yippee. So I took a magazine of theirs home with me. I considered it a tradeoff. Yes, I'm very mature.