0
I never imagined it could hurt so much to lose a parent. There's such a feeling of helplessness, loneliness, emptiness. I miss Dad so much!

My days were spent around Dad for the last months. I had to feed him, bathe him, change him, read to him, try to talk to him, sing with him or to him, try to keep him in this real world - what we see as the real world. His advancing dementia rendered him incapable of even taking a drink of water alone, incapable of stepping out of bed, unable to walk, turn in bed.

We had our small, private world. Now, there is such a big part of my life missing. I'm trying to fill it but nothing seems right just now.

My memories are all blurred. I keep trying to remember good things, but my clearest memory is the last kiss I gave Dad at the hospital, before I said: "Good night, Dad! Sleep tight!" And he did! Forever! Strange to think forever. I've always said "never" and "forever" don't exist.

I don't know where I'm at right now. The kids are doing okay. Miguel is actually good at school. He kept his feelings hidden. He only cried at the funeral and the night Dad died. I try to talk to him, but he's not ready. I know he surrounds himself with pictures of him and his granddad before he goes to sleep. Miguel is 16 years old. Inês - she's 18. She's been very agitated. She answers back, she raises her voice a lot. She hasn't cried for days. But she did cry a lot - so very much that it hurt to see. She got into university this year. Her mind's a lot on her studies, as it seems.

With Mum, there are bad days and some better days. There's just a sadness about us all that is so uneasy.

Today is two weeks since I last saw Dad. I spent the whole day at hospital with him, alone with him. Mum couldn't go. She had such a bad cold and fever during the days Dad was in hospital. I thought she shouldn't be near him. I regret not having given her the opportunity to say goodbye. I guess we are never sure if we are doing it right.

This last Thursday was my worst day. I cried from dawn to dawn. I couldn't stop. There was just an unbearable ache.

So it's two weeks tomorrow since Dad left. I keep wanting to see him in my dreams but he hasn't appeared.

I guess it takes time but time hurts!

The picture is of our last Christmas together. Christmas is going to be very difficult this year! 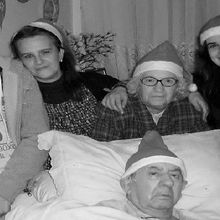 I am so very very sorry for your loss - I can't even imagine.

Everytime I read a comment I start to cry... I just don't know what to say right now... But thank you! It feels good to hear that it will get better.\r\n\r\nI just miss him!

My mother passed away last December after living with me for 12 years. It is so true that you never know whether your decisions were 100% right, but remember that you did the very best you could for your Dad. I read in a novel once that taking care of someone who is dying is like flying a plane into a mountainside. You know the plane is going to crash; all you can do is steer it into the mountain as softly as possible. Such a good metaphor! When my mother died, I couldn't believe I had to live the rest of my life without her. Even nearly a year later, I have trouble believing that. You mentioned that you're waiting for your Dad to come into your dreams. I believe he will when he is rested from his experience. It took my mother four months; but the dream was well worth the wait. My best to you.

Two weeks is so fresh and so raw… \r\nI'm so sorry for your loss. My mom died exactly 5 months ago today. At the two week mark, I can remembering being teary all day and so grateful for bedtime when I could sob with total abandon.

Thank you for sharing with us what is going on in your family right now. You all seem to understand that it takes space to grieve, and you are a strong family to allow each other to find your way. My sympathies for your continued loss.