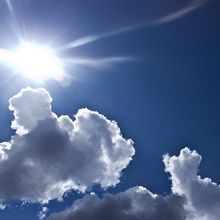 My grandma goes out almost every Tuesday afternoon with a group of friends from her congregation, to participate in an activity which is required by their organization. (Their word -- they don't identify themselves as a church.) Grandma is, at 96, the oldest in her circle of friends. One of these ladies picks her up here, and brings her home afterwards. It's the only time I'm not the one driving her. I've offered to several times, but she likes this chance to go with friends. I suspect this is a social networking thing for her, as much as a fulfillment of religious duty.

Yesterday, she was an hour later than usual getting home. I sat out on the porch waiting, and starting to worry, when her ride showed up. I helped her out the car and up the steps, while the driver came out, not to help it seemed, so much as to talk at me.

Yes, talk at me. Not with me. A running, babbling stream explaining how they'd seen a roadside produce stand, and just had to check out the goods. (Hence the late arrival home.) Grandma went inside, and I, not wanting to seem rude, waited for the woman to shut up long enough for me to thank her for bringing Grandma home.

The moment Grandma got inside, her "friend" switched gears. With a vehemence that took my breath away, she pounced on me. "So, you looking for a job or what? Whadda you do all day, just loaf around?"

I was so flabbergasted, I just stood there gaping like a large mouth bass in a fishing net. I must've looked like a total idiot. I don't even remember what I said, before she drove away.

Sit around loafing all day?!? I might've tried to convince myself it was a lame attempt at humor. But her tone certainly didn't sound like it.

Inside the  house, I asked Grandma just what had gone on. Yep, her friend who was  driving saw a produce stand and just had to go take a look. I asked her, did you go along? Nope. She sat in the car waiting. Did she at least leave the AC on? I asked. No again. But she did leave the window rolled down. I won't tell you what sorts of thoughts went through my mind. It's true that, here in northern AZ, it doesn't get quite so appallingly hot as it does down in Perdition, oops, I mean Phoenix. But it does get hot enough that if you get caught leaving your dog in your car -- rolled down window or not -- you'll get busted or it. A fine to pay, and likely some public shaming from anyone witnessing the event. My grandma is 96 years old. And this so-called friend left her in the  backseat, on a hot, humid monsoon day, for something like 35 to 40 minutes. Words fail me.

I got Grandma a drink of cold water, and got her to promise me she wouldn't go along with anything like that again. And to tell me, if becomes a recurring issue, so I can take over  his driving task also.

Now, here's the real kicker, the icing on the cake:

This woman is a retired hospice nurse!

Oh my Desiree.....that's just so wrong! I agree with Jean that perhaps this other lady may have some dementia issues. And, it sounds like she didn't learn much at their organization (church) meeting that day! As a former hospice nurse myself, please let me assure you that we're not all bad!! :)

how horrible for your grandmother and frightening for you. I can't help think that this woman may be having some dementia of her own making such a poor decision. If that has been her normal, lifetime behavior, it's hard to imagine her being hired as a hospice nurse!

Thank you both. That woman's snark attack isn't nearly as troubling as her having left a frail old lady on her own, in her car, on a hot day. I think any decent human being would want to not do such a thing. Let alone a former hospice nurse.\r\nSometimes, when some people have messed up big time- and they know it- they try to make themselves feel better by making someone else out to be a bad guy. Perhaps that was at work here.\r\nI've gotten fairly good at being assertive these days, and won't hesitate to be an absolute, ahem, girl-dog if I must. Not when my Grandma's welfare is at stake.

Omg! I can totally relate! I was actually writing a post about similar comments_mysql made to me. It's unbelievable, isn't it? Some people actually seem to think that since you don't have a \"real\" job, that you're just lounging around with your caree. So presumptuous and rude!

How awful!\r\nI'd call this woman on her actions before letting your grandma go in the car with her again. Let her know you were concerned when your grandma said she'd been sitting in the car, in the heat, without the air conditioner on. Her other comment about you was incredibly rude. Perhaps as a hospice nurse, she may have seen grandchildren take advantage of their elderly grandparents, but to question you in this way or make assumptions is uncalled for. If you have to stand up to her, do so with confidence! You are your grandmother's advocate - and that's a full time job.\r\nKeep us posted!