Understanding the Beauty He Saw

Understanding the Beauty He Saw 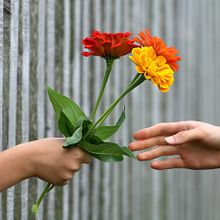 My youngest son had a beautiful tree tattooed on his side. On the bottom of the tree he had a ribbon inked in that appears to be blowing in the wind. On the ribbon is the word Strength. My son said that this particular tree is the strongest of all trees, and that this along with the writing on the ribbon reminds him of his two grandmothers and me. According to him, we are the strongest women he has ever known. This always made me smile.

When my mom passed away, my father bought this beautiful wooden urn which he had them engrave with my son's tree. The urn had a dual compartment so that my father's ashes could also be placed inside along with my moms. This urn brought my dad much peace. My dad placed a table beside the window which my mom's chair sat beside. Dad often told me that he felt like my mom was still with him once we sat the urn on the table. He often said when he called me that he could still sense my mom sitting in the chair looking outside and he contributed his feelings to the fact that the urn held her ashes. Some people commented how morbid they found the urn and that it was somehow preventing my dad from letting go. I will admit, that there were days when I found the sight of the urn to be sad as it represented that Mom was no longer there. But in reality, even without the urn in sight, mom was still gone -- her chair remained empty.  EVERYTHING was a reminder that she was no longer here, not just the urn.

And then this one day I came to understand the extent of the beauty this urn brought into Dad's world.

Dad was recovering from an illness and was unable to care for himself. I had placed him into respite care at the same facility which my mom had used (and actually was staying at when she passed away]). I brought the urn and placed it on the table in front of the window as Dad liked it back home. Dad had been having an awful time with his mind; he was in and out of reality often which was very concerning.  We didn't know it then, but dad had contracted meningitis and it was winning.

One day I received a call from the home. They were very worried as Dad refused to leave his room and he was distant and distracted as they described it. When I arrived Dad was lying in bed crying. He said that he had done something awful and that my mom had taken my brother (Clayton was mentally challenged and lived with my parents) and left him. He said he needed to find her and apologize as he needed them both to come back. He told me he couldn't live without them. I tried to talk to him, explaining Mom had died, that he hadn't done anything to cause her death. He wouldn't listen to me. He was strong in his belief that she took Clayton and left him and that I needed to find her so he could apologize. I was heartbroken. I didn't understand why his mind was playing these tricks and I didn't know how to make it better for him. As I paced back and forth trying to figure out how to make this all stop, I realized that the urn was no longer sitting on the table in front of the window. Someone had moved it and placed it up on the tall dresser -- most likely they were cleaning and worried about sun damage (it was a picture window, huge in size, which got the sun all afternoon). I picked up the urn and placed it back on the table. I then sat my father up in bed and showed him. He instantly stopped crying and started to say, "Mary, you came back! I'm sorry please don't leave me again."

He then turned to me and said, "Thanks Kath, can you go get me dinner now!"

I often wondered what I was going to do with the urn. It was too big for the spot they had in the cemetery. When dad passed away I had his ashes placed beside my moms. Then when my brother passed the month after dad, the funeral director advised me that his ashes would also fit as the urn was big enough for three to four compartments. I had Clayton placed inside with our parents. A few weeks after Clay died, we sprinkled their ashes, and the urn now sits on my bookcase, surrounded by family pictures and a saying which reads, "A family is a gift that lasts forever."

I appreciated you sharing this Kathy. Its awesome you observed the urn had been moved &amp; put it together that needed to be in you dads line of sight on the table......your touching story gave me a chill.(a good chill)

What a beautiful story!

What A GREAT blog...I so can relate...this has put some things in perspective for me. Thank you

Wow, Kathy. So many tough situations. As usual, you came up with great solutions. Many blessings to you!

What a great story! So many good reminders for us including the importance of seeing situations from our caree's perspective. It doesn't have to make sense to use, it just has to make sense to them. Beautiful! :)