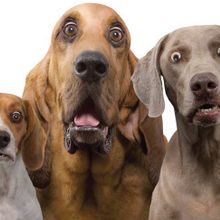 Or, in other words, confusion still reigns.

We had Mom and Dad over for Father's Day dinner. When I called to invite them, Mom was happy, almost giddy. "I have some good news!" She giggled, "They've changed the rules. We can have pets!" Apparently, she was told she shouldn't pay for a dog, but get one from a shelter (sorry guys, shelter dogs cost, too) and then the facility would pay for the food and vet bills and everything. Right.

I immediately started growling under my breath.

When I went to pick them up, I stopped by the desk and asked about the pet issue. The receptionist didn't know anything about this except that there had been "some talk". The only thing I learned is there is a woman in the independent living apartments who will be needing to move to assisted living -- and she has a dog she badly wants to keep with her. I suspect the rumor mill got activated and the assumption is if one person is allowed a dog, everyone has to be allowed a dog. I was told to call another staff member tomorrow to get details.

I'll also ask about Mom's mysterious visitor, who, if you remember, also offered to sell Mom a dog. I haven't gotten any confirmation this visitor actually existed.

And our chihuahua puppies? The four little guys are going in to be neutered on Tuesday. I'll have a full day without any pee puddles, whining, or growly, snarly play fighting. We love them to pieces, but four? I'm ready for them to find their homes. Two of them already have adoptions pending. One of those adopting families is... us. We've decided we don't want to part with all of them. We're adopting Bennie. One of the benefits is I can bring him over to visit Mom and Dad.

Okay, dinner went well. Our son brought his girlfriend over and Mom and Dad met her for the first time. It's still a new enough relationship, I get a little nervous and hope she likes us as well as we like her. The puppies love everyone, so they break the ice and run around the living room, giving everyone tail wags and kissy licks. Later, as the puppies are at the awkward age where it's hard for them to settle down to sleep, they wrestle and fight and mostly it's fun until one gets hurt and starts crying. Yeah, just like kindergarten boys. Sorry to say, tonight I resorted to turning on the TV in their room so they could settle down. It's working so far!

I know. I'm losing a lot of my Waldorf kindergarten teacher credibility.

Mom and Dad could not stop talking about their plans to get a small dog. They were excited and so happy. It's hard not to feel their excitement. Then I look at my daughter who is steaming. Truly. Steam is coming out of her ears and she looks like she's about to blow up. We remember Maggie. Later, I emailed my sibs, just in case one might decide a dog would be a GOOD idea.

I'm not taking any chances.

Good news! Not only did all my sibs agree a dog would be a bad idea for them, but I just heard from the patient services coordinator that the policies about having animals in assisted living were not going to change after all. Maybe she and others were able to convince the director. Now, hopefully my parents will be okay with all this.

I'm sorry, but this is just a terrible idea. People living in care homes or assisted living are there because it's hard, even impossible, for them to take decent care of themselves. How are they going to care for a pet? Many of the ones that I used to care for couldn't keep a potted plant alive.

Lucky for you someone else makes the rules! I think a visiting pet is a great idea though!

Just found out.... it is true. Assisted living residents may be allowed to have a small pet. It will be decided on an individual basis. This decision was made by the new director. \r\nThe person I talked to, Jodi, knows my parents well and agrees they would not be considered competent to care for a dog. Mom would not consider any other animal. Now, all I have to do is cope with excited parents suddenly sad (dad) and furious (mom) because, of course can take care of a dog. Jodi wished me luck and I wished her luck, too. She knows the director has just opened a can of worms!