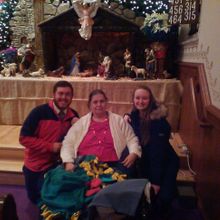 I have had several issues that have occurred since my last post.

I do not have any internet of my own at home so am not online as much as I used to be. I am on when at the dialysis center with mom (if it's is working as the public access is limited to their excess bandwidth and the new machines do more auto reporting so bandwidth has been limited), when doing the laundry and when I can get to the library. It has even been hard sometimes to get my time sheets entered online.

On September 17, my mom had her toe removed. On September 20 we learned that she had a MRSA infection in her foot and would need more amputated. We did not know how far up they would have to go until the doctor got in there on Monday, September 21. They ended up with another below the knee amputation. Recovery has gone better than the first amputation.

On November 18 she was released from the surgery clinic on the amputation and on December 15 she was cast for the start of the second prosthetic leg.

On November 5, I was trained to be able to take her out using the slide board.

On November 29 I took mom out shopping.

I took her out for Christmas Eve to the children’s Mass at our home church.

I had car breakdown on November 9 and got replacement care on November 13. I was having to do everything by taking the bus or walking made what was normally a 10-hour day a 15- to 18-hour day.

I started a new client on October 26 that I filled out paperwork for on September 10.

My friend and client who I cared for on weekends lost his weekday providers on October 23 and I have been doing all since. This friend is also has to move and has had some problems with this that are the result of his MCO not being able to measure doorways! He has been in a program to lose weight to be able to qualify for bariatric surgery. He has lost 35 pounds in the last six months and a total of 121 pounds in the last three years.

I have also gone through a bought of depression myself.

The photo is taken Christmas Eve at church with some friends from church.

I smiled every time I read \"I took mom...\" or \"I took her out...\" Good for BOTH of you for getting out &amp; about! Yes, it's difficult, but to stay home is so isolating! My mom had COPD and Emphysema and was basically housebound the last 6 years of her life, even though she was fully mobile. She was simply too embarrassed to be seen in public on oxygen, and was always worried that a portable tank might fail, so she would rarely go out. Sadly, most of her good friends had already passed, and those she had left lived pretty far away and couldn't travel to see her. She had breathing issues so was not comfortable visiting on the phone, so it became difficult for her to maintain those friendships since she would not leave the house. She did find a couple of online COPD support groups and found friends there, but it was still a very lonely, miserable existence for her. I live 800 miles away so it was tough to convince her to get out when I wasn't there to make it happen. Your Mom is very lucky to have you there to help her get around, and YOU are lucky that she is willing! What a team! I hope the New Year brings you many great memories of time spent together.

Larry, I'm glad you checked in. I've been thinking of you and your mom. Sounds like you're plugging along as always, ever ready to surmount any obstacle that presents itself. I join Jan in wishing you an easier time of it the New Year. No one could be more deserving.

Thanks for remembering us, Larry, and keeping us up-to-date with everything you're doing. You have accomplished so much. I hope the New Year brings less obstacles for your Mom and for all the hard work you do every day.

Oh, Larry! I have missed you! I'm so sorry for all you've been through.\r\n\r\nYou've got so long days--it's awful that you also have to track down some way to get online. What would it take to have Internet access at your apartment?\r\n\r\nI so hope 2016 will be an easier year for both you and your mom.