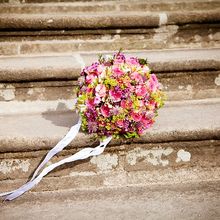 This trip has been hard.

It's 7:49 and I'm supposed to wake up my husband at 8:00 and walk Mom and my son down to the breakfast buffet. Mom has been in so much pain from not being able to sit in her recliner and has had so much confusion from all the stress and pain. At least I know, or think I know, reasons for what I'm seeing.

In addition to the pain, she has been disappointed, I think, by lack of attention. She really loves my cousin and his wife, and all the times we've visited, they've treated her like a queen and given her so much time and attention. But the only times we've seen them this weekend, they've been hosts at their daughter's wedding, so they haven't had attention to spare. Fortunately, another cousin and her wife are here and we got to spend lots of time with them. But even though we sat with them at the reception, the overall noise level was so loud that Mom was mostly left out of the conversation because she couldn't hear and was probably too tired to make the effort to jump in anyway.

After the rehearsal dinner, she was telling someone, "I don't know if we're staying for the wedding or not. They're my drivers and they haven't told me." On the way back to the motel, she said, "I didn't know we were going to the wedding, so I don't think I brought any clothes to wear." There was just really a lot of this kind of confusion. This was so much worse than her normal memory problems--but then again, her normal problems take place in the context of her normal life where everything is familiar and predictable.

Aside from my worry and dismay over my mom, there have definitely been some positive moments. My husband has done a great job of taking care of us and getting us from place to place safely. Yesterday, my son and I went out to a restaurant with my cousin and her partner and their daughter (same age child!) and my husband went out and got a sandwich for Mom to eat in her room so she could keep relaxing. She'd been up all night with diarrhea the night before, though thank God, she managed to get to the bathroom each time and there were no midnight phone calls down the hall. My son had a great time hanging out with his cousin and they bonded, of course, over the girl's iPhone games.

I had an a really soothing talk with this cousin I'm talking about, who is a psychologist. She was so sympathetic and understanding about my mom and shared with me that her partner also has mild cognitive impairment. I had no idea! But hers seems to be caused or at least significantly affected by some pain meds that she has now stopped taking, with some cognitive improvement. Anyway, it felt good to exchange our stories and compassion.

Well, it's 8:00 now, time to walk down the hall and see how they survived the night. Hope all is well or well enough with my fellow bloggers.