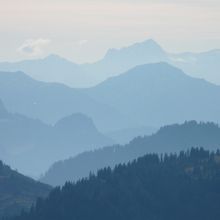 Awesome Hubby and I enjoyed our back to back vacations.

We started with a family reunion in the Santa Cruz Mountains for a weekend. We left Santa Cruz and headed to Weed, which isn't really a destination for most folks, including us, but it was a good stopping place before we headed to Bend, Ore. Weed was interesting to us because we like to walk around a new place and just look around. We were doing this at 9 p.m. at night with maybe three people on the street besides us. We found a motorbike with a clue on it that must have been part of a recent scavenger hunt.

Mt. Shasta was a prominent view on our morning drive into Oregon. We made it to Bend and during lunch found out that my uncle, Elly's son, had been having lots of tests on his heart and he wasn't feeling the greatest. He was up to showing us around town that afternoon and we had a great time with him and my aunt as they told us about why they loved this place. We spent the next day driving to some lava beds and several waterfalls. We didn't do too much hiking but it was okay for his condition, I guess. He doesn't complain, like his mom!

The next day Awesome Hubby and I had decided to spend most of the day hiking/walking the trail around the river (in Bend) and back, about 12 miles. It was a wonderful day, not hot. The trail and the river go through town so we enjoyed some nice Hawaiian food for lunch and then walked the six miles back. Right after lunch, I got a text that my aunt took my uncle into Urgent Care and he was receiving an IV and meds for pain. After a CAT scan it was determined he had a duodenal divertuculosis issue. So, prior "heart pain" probably had nothing to do with his heart and is now taking meds for this condition. We decided to go ahead and go out to dinner without them, where they had made reservations for us. Aunt and Uncle didn't arrive home from Urgent Care until after we finished dinner and were home a while. We were thankful for the day we had spent with Uncle before he was terribly sick and know he will be hoping we can come back when he can do more! We had a relaxing day on our "walk" and were glad to have some time to ourselves during this part of our vacation.

Our next few days were spent in Keizer, Ore., with AH's cousin and wife. We took a leisurely drive over the mountains and checked out some campgrounds along the way for future trips. Our big trip with Cousin was to the trail of ten waterfalls, Silver Falls. It is only about an hour away from where we were staying. This trail took us all day and the waterfalls varied from just a trickle to impressive, walk behind Falls! I ate a few wild berries along the trail and enjoyed another nine miles of walking.

In the evening we played cards with cousins. The next day was a split, the guys did errands around the house and I went with cousin to the airport to pick up some high school students from Japan for home stays. The conversation on the drive was interesting and I found out that the cousins had been caregivers for nine years to her mother, in their home. I was saddened to hear that our cousins had not taken a vacation while caregiving by themselves but had taken Mother with them every time they vacationed. I understood now the burnout and the degree of erosion that their marriage had sustained. We had been instrumental in helping the cousins put their marriage back together over the past year but I didn't know some of the old issues. I enjoyed our drive together and meeting the students which we picked up from the airport and then brought to their host families. We had a wonderful dinner out at a funky Asian restaurant before we left for home on Sunday.

Getting home was a very long 12-hour day. We came back to a very hot and dry yard. It was unexpected since I thought my sister would have done the watering and kept up the yard. She did leave a day earlier than we expected and I had talked with LivingRoom Son to encourage him to step up with the watering. I still lost at least one plant and others that I had nurtured from last year's watering problems are now done for.

Elly was in great shape and form! She was clearly in control and told us that she had told Sister not to bother watering some things. Elly said that she made sure my pots were watered and sounded very proud of herself. We ended up getting into an argument where she was clearly confused but confident in her arguing skills.

The doctor appointment was attended by both sisters and Elly. According to both sisters, the new Dr. is very nice and a bit comical in that the Dr. is from India but clearly spoke as an American from the South which doesn't really compute if you are looking at her! Dr. seemed to enjoy taking time in explaining to Elly what her medications were for and that "Girl, you should be lucky to have just four of them!" I did see a blood work request that I suppose we'll do in two weeks before the Kidney Dr.'s appointment.

I have signed up for a series of caregiving seminars on "Taking Care of Yourself" for the next month or two. I missed the first one but I had talked with Caregiver's Resource when I signed up letting them know I had already planned to be gone on vacation. They offered respite care but I declined since I can leave Elly for the afternoon.

So, after getting home on Sunday and having the tension with Elly, we were only too happy to leave again on Wednesday to go camping up in the Sierras. There was food in the fridge, LivingRoom Son and NurseySister were commissioned to check in on Grandma and we left as soon as we could get the trailer hitched and packed! It was a good time of relaxing and eating when we wanted, what we wanted too! Some friends had gone up earlier and invited us to eat dinner once we got up there. By the weekend, our group was assembled and the annual Dinkey Creek Camping Trip was experienced with fun, food and fellowship! Sunday afternoon came too soon and down the mountain we came, not really wanting the freedom to end...so... we unpacked, showered and went out to dinner - I got to pick! So a steak dinner with ice cream for dessert was the fitting end to our vacation.

My Nursey Sister next door enlightened us about the call Elly made to the Air Conditioning Company (while we were gone) because she was convinced her AC wasn't working properly because she heard it running constantly. This was a complaint she had before we left but we kept telling her that with the temps during the day for the past three weeks being 100+ and the evenings in the 80's, her house wouldn't be able to cool down and allow the AC to remain off for a time. Elly got her electric bill also which was over $400 for the month so that also prompted her to have her AC checked. So, for the second time in a month, the AC man came out and explained just like we had about how her old house is so hot and the AC will run most of the time, there is nothing wrong with the thermostat nor the unit, please pay $150!

So the AC cost her $600 - $100 for the first AC visit, $400+ for electric bill and $150 for second AC visit. My sister advised us not to help pay unless she asks since she made these decisions on her own and she is clearly showing BIG signs of controlling her environment. AH was infuriated after hearing what happened and then even more so when Elly turned off the lights and the fan while he was sitting in the chair reading and she went to bed. Yes, he was in the room and she saw him as she did this. I was with My Sister at the time who was telling me, just soothe her, don't argue, she's a toddler with diaper rash and we are the ointment. Ahh, I just couldn't say this to AH after my visit to Sister and I found him fuming!

This afternoon at lunch, Elly asked me when we were going out with the trailer again. Hmm, I spent all morning cleaning it. I just shrugged and said I didn't know. .  . . we haven't planned it yet but I think I hear the ocean calling!

I'm grabbing my sandals now. :)\r\n\r\nI love that there was follow-up from the class. !!

Denise! Sue called me today from Caregiver's Resources and assumed I had attended last week's class. She asked me about my action plan, I said that I wasn't there last week and hoped I would get the book tomorrow when I came. She was very encouraging and wanted to hear stories about what I was doing to care for myself. I can't wait to say that I am going to the Ocean Friday!! Please pack your warm clothes and sandals so we can go out on the beach! Oh, and yes, I do go out in the middle of the night just to see the ocean glow and try to catch a glimpse of grunion - never seen them yet! Will take some pictures!

Well, EG, I want to take a vacation because these sound awesome!! I'm so glad you could time away. \r\n\r\nI'll be interested to hear what you think of the caregiving seminars. And, I also can't wait to hear where we're going next. It will only take me a few minutes to pack so know I'm pretty much ready to go any time. :)