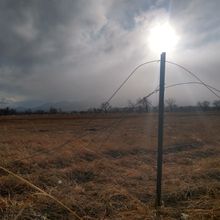 I am not a hundred percent certain how to approach the topic of homelessness and caregiving.

During a home visit with one of my clients who had previously experienced over a decade of homelessness, I heard stories of how after a recent turn for the worst of his wife's health had had a devastating effect on him, her, but the cat was doing just fine.

He chose to resign employment in order to care for her. Beyond love and compassion, I believe it takes dedication, courage, and bravery to quit the safety and security of having a secure source of income.

When I met the client, him and his wife had recently past an anniversary season: their first year being housed.

This "anniversary season" is particularly important to understand. Grief of transition can come in many forms and flavors. Sometimes it appears as a specter, a foreboding of sticky uncertainty. It can creep up in the form of doubt, nightmares, and all sorts of environmental triggers that cue us to feel stuff we have suppressed, hidden, or forgot about. Their impact can be subtle and dynamic.

Anticipatory grief is just as messy. Yet, as in the name, with this form, we anticipate, we expect, we imagine, we catastrophize, and we can also plan for the coming loss, change, or death.

The husband was stressed. He was intoxicated, but I felt it was in the best interest of the client's safety and mental health to stay for the duration of an hour to assess his current circumstance and begin crafting an action plan.

"It's her birthday today." He told me over and over. He loved her. No tears shed. Yes, he did weep. He was heard and seen. I heard him wax and wane and lament of the hardship of responsibility to the house and it's obligations.

Beyond neighbor's getting arrested, offering his wife meth, and three a.m. drug raids, the cockroaches and mice kept vigilance. And so too does the cat, a happy runt, the, "only reason we don't go back to the streets today."

In the streets, cold no longer has an effect. Of course, the sting of frostbite is very real, however, "what is cold? You tell me after twelve Colorado winters outdoors living under bushes and tents."

Let's step back for a second. This client is an Entrenched family caregiver that believes life on the street is the better alternative to living in his current home.

For me, this is a humbling paradigm shift that requests deeper exploration.

As caregiving consultants, specialists, advocates, and educators we are responsible for listening, validating and asking those open-ended questions that support the client.

We see the defeat. We ask about hope. We note the desire for respite. We offer resources. We hear despair. We honor. We sense danger. We co-create safety.

The keyword for the Entrenched is to Receive.

Maybe this is one way to talk about homelessness and caregiving. I'm curious to learn more.