Voices from the Edge: The Tools We Gather

Voices from the Edge: The Tools We Gather 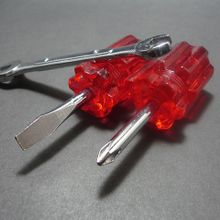 We gather our tools, one by one,

Reminders of our heritage, of our homes.

We keep the ones we need, tucking them into

Our own tool belts.

It is a Thursday, Allen's night to provide supper for us. He has made a call to Pizza Hut and placed the order for the Triple Treat Box. He has given himself enough time to get there and I am looking forward to a night out of the kitchen.

But the front door bangs open with a force only a tall boy can generate and Allen stalks across the room. His hands are empty. "No pizza?" I ask, but Allen doesn't answer me. He pounds up the steps, slams his bedroom door, then stomps heavily around the room.

I pick up my knitting needles and wait. There is an answer to why Allen is empty handed and eventually, when he is ready, he will share it with me. In the meantime, I cast on 36 stitches to begin another child's hat for charity.

My grandmother gave me knitting needles,

a connection to the homely arts.

After a few moments, another door is slammed. We have, thank God, an old house with solid doors. I hear Allen muttering to himself, working things out in his head. I have knit five rows on the new hat when Allen pounds down the steps. Now he is ready to talk.

I catch the yarn with my needle. "Why not?" I ask calmly. Allen is on the verge of a meltdown, but an aura of calm often averts one.

"Got my order wrong! No, lost the order! And they made me wait--even though I called--and they charged my credit card but they didn't give me the order. So I left." He takes a deep breath.

My mother gave me the patience

of her vanishing Powhatan tribe.

I continue knitting. "Why did you leave?" Allen has taken a second deep breath. His fists no longer clench and unclench.

I nod. Anger makes Allen feel out of control. For someone who lives on the autism spectrum, control is vitally important. "You made a good decision," I tell my son. "But now that you're not angry anymore, what should we do?"

My father gave  me a tire jack and jumper cables,

so I could rescue myself.

"Okay." I put my knitting aside. "How would it be if I called the manager?" The decision here needs to be Allen's. He was in a situation in which  he lacked control. I want him to regain that control.

He nods. "Okay." So I pick up the phone and dial, asking for the manager. Courtney remembers Allen clearly and apologizes profusely.

"We're real busy tonight," she says. "And somehow his order got lost. But it's here and it's ready if he wants to come back."

"That's  not happening," I tell her. "And I know you don't deliver to our area."

"But I could bring it to you myself," she says. "I can be there in ten minutes."

My brother gave me companionship

and a childhood of summer days

And ten minutes later, she is at our door, pizza boxes in hand. "I voided your son's credit card," she tells me. "There's no charge for these. I'm just sorry he was upset."

"Thank you," I tell her as I take the pizzas. "Just so you know, in case this happens again, Allen is autistic. When things don't go as planned, he loses control."

She nods knowingly. "I thought so. My sister is autistic, too. Tell Allen he can always come to me." She is off with a wave and a toot of her horn.

I carry the pizza into the kitchen and lay it on the table. Allen gets out paper plates.

"So," I say to my son as we munch on our pizza, "what would you do if something like this happens again?'

"Ask to speak to the manager," says Allen. "Cause she seems to understand."

We gather our tools, one by one,

Adding them to our belts,

Knowing they are there

To use as we walk our paths.

Since being diagnosed with autism, Allen has had to find tools to help him live in a world he does not understand. And he's just added one more to his own belt.