Voices from the Edge: We're All a Little Looney Tunes

Voices from the Edge: We're All a Little Looney Tunes 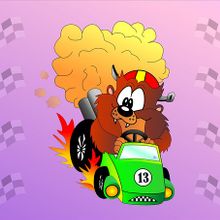 Our family owns no less than eight versions of Monopoly. Back in the day when Lost Boys frequently camped out in the living room overnight and Bonnie brought home potential suitors, Saturday night Monopoly was a given. It’s been a while since we’ve played, so it was a pleasant surprise when Allen asked last Saturday if Ron and I would like to play Looney Tunes Monopoly after dinner. “So we can all laugh,” he said. It sounded like a plan.

Allen has spent a great deal of the summer working on social skills and acceptable public behavior. I knew that the planned game was not about winning but about conversing and having some family time. I explained this all to Ron as carefully as I could. “Remember,” I told him as I set up the board, “it’s not about who wins.” Ron nodded his head; he loves Allen, of course, but I’m the one who does most of the parenting for our adult son who lives on the ASD spectrum.

If you’re not familiar with the Looney Tunes version of Monopoly—and I honestly don’t know anyone other than us that has this version—the game pieces are cartoon characters and the board locations are cartoon shows. The game uses “laughs” instead of money. Allen and I were doing our best to provide the requested number of laughs for rent. And Allen was having fun, making silly comments about the characters, using Wil E Coyote’s figure as he ran around the board. We had properties spread all over the board.

For Ron, though, the game was a different story. He concentrated all his energies on acquiring the railroads—in this case Witch Hazel’s broom rides, Wil E Coyote’s Delivery, Martin Martian’s Taxi, and Acme Rockets—which cost each of us $200 laughs—all of our GO money—when we landed on the spaces. He also invested all he had into three board properties, amazing gigantic hotels and constructing what we called “Fear Street.”

I, part mother and part prognostic, saw where this was headed. I whispered to Ron that he should consider diversifying, making some trades and some deals and spreading things out. He said, “I’m doing fine!” and took another $200 from Allen.

“The point is not winning,” I said to my husband when Allen got up to get a soda. “It’s having fun.” Ron nodded at me. But a nod doesn’t mean one is paying attention.

It wasn’t long before the inevitable happened; Allen rolled a 7, which would put his Wil E Coyote squarely on Ron’s Rabbit Seasonings, costing 750 laughs. Much more than Allen could manage. I tensed myself for the meltdown.

Which didn’t happen. Instead, Allen surveyed the situation on the board, calmly placed the dice in the center of the board, and said, “I don’t want to play anymore. It stopped being fun.” Then he walked away.

As Allen left the kitchen, Ron turned to me and said, “Is it my fault?”

And I started to say, No, of course not, but I changed my mind. Ron is Allen’s father. While I bear almost all of the responsibility for aiding Allen in his quest to be an independent adult, his father should at least not upset the apple cart.

“Yes,” I said to Ron. “It was your fault. Because it wasn’t about winning. I made that clear to you and you weren’t listening.”

“It used to be about winning,” he said.

“Times change,” I said. “Needs change.” I motioned to the wheelchair he was seated in. “Life changes.”

He nodded—because that’s what he does—and wheeled himself into the living room to watch TV.

I was putting away the game board and pieces and being proud of Allen for the way he handled his disappointment --he didn’t get angry or dislodge the board or storm out of the kitchen—when my son appeared again and started piling up the cards.

“I’m sorry,” he said. “I just couldn’t play anymore because it got to be stressful. Not fun.”

“That’s okay,” I told him. “I’m happy you didn’t get angry, you just stated your feelings and walked away.”

“Well,” he said, “that’s what you’re supposed to do when you’re mad.” He picked up the figure of the Tasmanian Devil and ran him around the board. “I don’t like being mad. But sometimes, it’s fun to be looney.”

Sure is. That’s all, folks!