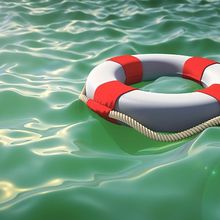 There was an oft-repeated joke about the Professor on Gilligan’s Island and it went like this: If he could make a washing machine from bamboo, a Geiger counter from spare parts, and jet fuel from plants, why couldn’t he fix the boat and get the castaways off the island? In similar fashion, the Well Spouse who has been rudely thrust into the new role will ask the same question. Why can’t it be fixed? Almost every week, it looked as if the seven hapless victims of the Minnow’s wreck would finally be rescued. Alas and alack, by the time the credits rolled, all hope had been dashed on the same rocks that wrecked the Minnow and the castaways found themselves sitting around the same campfire, lamenting their fate.

It took us 26 surgeries to realize that, for Ron, more invasive procedures would not help the situation. In fact, his abdominal muscles were so weakened by so many repeated surgeries and his immune system so compromised by repeated infections, that he developed an enlarged heart, suffered mini attacks, and eventually needed to have a pace-maker/ defibrillator installed. I wonder what parts from the Island the Professor would have used for that?

One of the many roles of the Well Spouse is to continue to be optimistic, even when it appears all hope is lost. I was exhausted by surgery number 20, willing to throw in the towel and admit defeat. The mountain of medical bills had grown proportionally with each procedure. But Ron accused me, more than once, of “not wanting him to get well” (yeah, because I liked all the burdens I was carrying so much), so we ploughed ahead. After every surgeon we consulted—and the list was immensely long—vetoed anymore surgery, we began to look for alternative means of relief.

While Ron continued to hope for a miracle, I came to realize a few years into this insane journey that not only would rescue not come, a miracle cure was also a remote possibility.  Here is where the cheer-leader role of the Well Spouse gets a little murky. We want to believe in a cure, but our feet are mired in clay. We have also come to suspect—as our Ill Spouse has not—that we are too far into the journey to ever go back. Ron might want to turn back the clock fourteen years, but the kids have grown and gone on with their own lives. And, to a large extent, so have I.


Because there is no rescue for us. We need to learn to rescue ourselves. We remake ourselves each and every day. We find our own places of refuge—a few moments with a cup of tea on the back porch, a fifteen minute trip to the bookstore, an evening out to dinner with a friend. I made a very conscious decision at Year Two of this journey as the Well Spouse: I could not let this control my life anymore than it had to. I could not lose myself in what was only one aspect of me. I was sorry as could be that the illnesses needed to control my husband, but I refused to let it destroy me or my kids.

I’ve made good on my promise. Despite the hospital trips and the medical bills and all the things I need to do as the Well Spouse, I think of myself foremost as writer and teacher, not care giver.  I recognize that I have gained much these last fourteen years. Even if Ron were to be cured tomorrow, there would be no going back.

Gilligan’s Island lasted for three years. We watched each week as yet another potential rescue was thwarted , usually by Gilligan. The end of the third season left the Castaways on the uncharted island because, at the time, a fourth season had been planned. In 1978, the seven passengers of the S.S. Minnow appeared again in Rescue from Gilligan’s Island. After 15 years, they returned to their own lives, only to find that things on the mainland had changed. Eventually, a planned Christmas reunion aboard the Minnow II led to another shipwreck, with the cast once again back on the island. There was a sense of relief; this was what they knew. This had become home.

My life as a Well Spouse is not easy; sometimes it is darn hard. But it is what I know. The roles I need to fulfill, for Ron and for my students, are familiar to me. I no longer look for rescue. I no longer need to be rescued.

I figured out how to rescue myself.