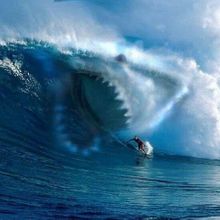 Once in a while amidst your bad days, you will have a good day. A great day even. Make sure you remember those days. Mine was at the Dollar Store. It's close enough to walk and I needed some fresh air and to grab some Band-Aids, some peroxide and some Reese's peanut butter cups.

I was ready to check out when the clerk told me that their credit/debit machine had crashed just now. Lucky for me, I had little stash of cash hidden in my purse. Don't we all, for emergencies, like chocolate? I pulled out my secret money and realized it was folded around something. That "something" was my Momma's driver's license. I was not expecting to see that...and the waves came crashing.

I've been told that I'm "coping awfully well". And maybe I am, I don't know. I just know that sometimes, unexpectedly, grief pounds over me in waves that leave me gasping. They crash without mercy and they don't even give me time to catch my breath. All I can do is hang on. As the waves of sadness washed over me, right there in the Dollar Store, I knew that I would come out on the other side. Maybe a little worse for wear, a little weak in the knees, a little teary-eyed, but I would survive. Still holding onto Momma's driver's license and looking at her picture, I could feel the tears coming. I continued to stare blankly at her photo as I realized that those giant 50 foot waves that usually pounded me into the sand, rolled me around and then almost drowned me were subsiding. And then, as quickly as they had come, they were gone.

The swells of sadness went back out to sea and were replaced by giggles and smiles and Momma's voice in my head, saying, "DeReita, child, what in the world? Why do you still have that? You need to throw that away! I was never that fat. It doesn't even look like me! It's awful, plum awful!" She just went on and on, at least her voice in my head did! I just couldn't stop my laughter! I composed myself enough to somehow pay my $3.21 Dollar Store total. I'm sure the cashier thought I had lost my mind, all my smiling and giggling for no reason that she could see. I think there's a full moon. Probably why she didn't question my sanity! I just know that I was too busy enjoying my "feel good moment" to be concerned about how crazy I might look.

I will keep this day tucked safe in my pocket, because I need to know that there are and will be better days. Days without tsunami waves. I can't stop the waves and I really don't want to, but maybe I can learn to surf. Score: DeReita - 1, The Waves - 0

I'm soooo enjoying your blog posts and am grateful you share these moments with us.\r\n\r\nYou remind us that the waves hit and then they subside. We can relax into the wave, knowing that the next wave will bring a treasured memory and sometimes, like for you, a conversation.

Your description of those particular waves of grief is perfect, how they arise and build and crash and recede. Thanks for your great story. I was there with you picturing it all. It strikes me how I get into trouble if I try to put a damn in front of the waves and attempt to contain them. When I let them do what waves do, it works out. Like you showed us, peace is the gift left in the sand.

Trust me, that cashier was just thankful for a customer who was actually smiling, one who was giggling instead of griping.\r\nYour Mom sounds like a cool person.\r\n(((Hugs)))