Mamadanz
So our son's wedding was this past weekend. For the most part, it was wonderful, beautiful -- all the great things you want for a child's start of a new life with the one they love. But...

Thursday before the wedding, our youngest son calls me at work and tells me that Dad wants me to take him to the ER. O... K... I have a great boss who says, Just go, and I end my day/week early and head home. Once there, he tells me he has incredible pain in his hip going down and around. (I think sciatic nerve). But since he asked, I take him.

At the ER he is vague about the pain. Doc is good and sends him for CAT scan/x-rays. They also pop him an oxycodon. After the tests, she asks him, Any better? He complains (rudely) that is was no better. She orders a shot of another, stronger drug. That takes away his pain and loosens his tongue. Our future daughter-in-law is an intern chaplain at that hospital and stops in. His mouth just runs and runs and runs. Thankfully they come to discharge him, sending home a script for percocet. At home, he gets sick from the double dose of meds at the ER. Once he's settled, I go to fill his script and try and run errands for the wedding.

Friday, he said he was still in pain and took one percocet. The middle daughter and I went out to do wedding errands and left him with the older daughter. He refused more percocets.

Saturday morning was the rehearsal and he went and didn't complain about pain. Good! I spent the afternoon cooking for the rehearsal dinner. With everything ready, we started to pack my car with food. Younger son helped me take trays out to the car and we left him inside. I come in from the first trip out and there is one quarter of a tray of sausage, peppers and onions on the kitchen floor! "I was trying to help!" Quietly I clean up  (what else can you do?) and he accuses me of being mad. I explained I wasn't mad, just trying to clean it all up so we could go.

He had a good time (or so it seemed) at the rehearsal dinner visiting with his brother and cousin. Afterward he complained he didn't get a chance to talk with his brother. I explained to him that he had more time than I did since I sat with our son's best friend (our "adopted" son) who was sitting alone and I didn't want him to be alone..

Day of the wedding arrives - Sunday. He went to church, refusing meds and smiling. I thought this will be great. I went to the hall for set-up. He helped out at the church. Soon after I got home, he got home and plopped in his chair. I ironed dresses, pants, shirts, etc. He went to get ready (just a suit -- no tux). Once he came down, he started rushing me -- are you ready yet? He was so impatient  that we left 15 minutes early. Got to the church with over an hour before the ceremony. Then it began.

Nothing was right in his eyes.

When was this thing starting? Why did we have to wait? Get this show on the road.

I went into the sanctuary and greeted early arrivals. When I got back to the church parlor, David (the groom) had the flowers and boutonnieres out. As mom, I had to pin all the men's flowers on. That wasn't right in his eyes and  I got criticized for that and taking too long (even though the photographer was good and not asking us to hold poses for too long).

With 15 minutes before the bride was to arrive, I finally told him, let's go to the front of the church for our entrance. You might have guessed this -- he wasn't happy we had to walk around. Once in the vestibule, he started pretty non-stop about wasting time and how we had to go and why weren't we going. I calmly explained we had to wait for David to enter with the minister and then wait for the bride to enter, then the music change and we could go down the aisle.

Once the bride came into the vestibule, he was ready to go. It was hard making him wait for her to bee settled and the ringbearer to take his place. Finally, we went -- sooner then he should have and the photographer didn't get our picture because she wasn't in place.

Other than the fact he physically sat on my hip for the whole ceremony, the ceremony went without a hitch and was beautiful.

The receiving line was fine as far as I could tell because (God forgive me) I ignored him so I could greet the guests.

Formal pictures did not go as smoothly. The main photographer as our middle daughter. She was hot and sweaty and had to clean her eyeglasses from the sweat and all. He snapped rudely at her and she came right back at him. He didn't return the comment but he was sour. He didn't listen to her about posing for pictures and he barely smiled. He snapped twice more at me. Then we were done with pictures.

The bride and groom left with Brittany and our youngest daughter and her boyfriend for their pictures where he proposed to her. I was left to gather things things up and walk over to the reception. He drove over with the drinks in his truck.

He was rude and obnoxious at the hall. Even Brittany's good friend (who works in the hospital and so deals with rowdy/unruly patients all the time) commented how really bad he was. At one point he snapped at me that maybe he should go home. It took much restraint for me not to snap back, maybe you should.

Once the kids came back and reception started, he got a little better. By the time the music for dancing started; he took me on the dance floor multiple times. No apologies for earlier behavior and once he even criticized me while we were on the dance floor but at least he was participating.

When clean-up started, he complained his hip and feet were hurting and he couldn't do anything. One of the kids reminded him he was fine for dancing; he just grumbled and walked away. Clean up was left to Brittany, David (the groom) and myself (I wouldn't let the bride do clean-up). We were all pooped -but we got it done, took all the leftovers over to the church to store for a day or so and then followed them back to their place to unload the gifts from my car. He went home.

I wasn't going to let him spoil the day for the kids (any of them) or for me. I think we succeeded. Monday, Britt and I went out to wander a local mall and just decompress.

He's been totally miserable since the wedding -- both physically and mentally. Thankfully, he did not make havoc Wednesday night when we celebrated Ashley's birthday a few days early (he had spoiled her birthday last year so we were all prepared this year.)

It really is a challenge to keep things positive when Mr. Negative is out to do his thing. 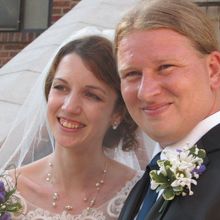 How can you not be happy looking at these two loving faces? 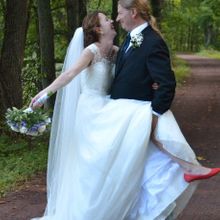 I love the photos!! It looks such a wonderful celebration of true love. There's nothing like that. :)\r\n\r\nMD, you are just fabulous. I just can't keep up with you! I love how you get it done while keeping your composure and your respect for others and their issues. My dad acts like a goof ball during important moments -- I just think the emotions of these events make him uncomfortable and he's not sure how to express himself. I think he worries about the change (even the good ones) and how they'll impact him (which is bizarre, since it's not about him but that's his vision). Anyway, I felt for you as you maneuvered around all the spills (food and emotions). I hope you found a moment that allowed you to breathe in the special event and feel pride at how wonderfully your kids are doing.\r\n\r\nThanks for keeping us posted. Wishing you a spill-less day.

Thank you frogger16, jan and Desiree for your wonderfully warm and heartfelt comments_mysql. You actually brought tears to my eyes this morning when I read them. Thank you so very much - I truly needed the support. &lt;&lt;&gt;&gt; to each of you!

The wedding couple are so very beautiful. \r\nAnd you, my dear, are a hero of the first order! I salute you, for your efforts to make the day a happy one, and not allowing anyone's bad mood to spoil it. I hope your son and his bride appreciate you the way you deserve.

Thank you so much for sharing your story and pictures. I am totally proud of you for providing a marvelous day for your son and his wife. In the years to come you will remember with a full heart how you helped them begin their life together. And by being \"the adult\" in the room and keeping everything in perspective, you were able to give your husband what he needed as well.

What nice pictures of a \"happy\" couple indeed! Your attitude shined through all those challenges and was quite an inspiration to me...Thank you for sharing your son's wedding!