Well, THAT Was Close

Well, THAT Was Close 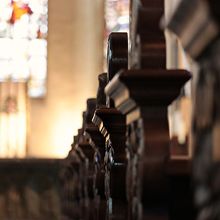 We go to church every Saturday for the 5:00 pm. Mass. She started going in the evening when she was recovering from C-diff. You see mornings were rough for her then she would usually have a rush-to-the-bathroom incident. She continued going to Saturday evening Mass out of habit after that. When she stopped driving a little over a year ago I started taking her to church with me, again at 5:0 p.m. and now that she lives here, well you get the picture.

So this evening we're in church. Shortly after communion she started acting as though she didn't feel well. We ended up having to leave early -- the Mass itself was over we were in the announcements phase but Fr. Kaufman hadn't left yet and you're really not supposed to cut out before he leaves -- because she had to go to the bathroom. There is a bathroom in the church basement but she took one look at the stairs and refused. She about fell rushing to the car which really scared me.

We got home in time -- thank you God no poo in my car -- but she was really upset. Insisted on getting out of her church clothes while sitting on the toilet. Her tremors were very pronounced which happens when she's upset. Thing is, I can't figure out why she got so upset. We made it home in time. Mass was really over and Father knows what we're dealing with so I know he didn't mind.

She didn't want to put her PJs on though, just wanted out of her church clothes. And sat there with just her undies on, shaking her head "no" over and over. She can't tell me what's going on in her head. I have to think that the probiotics are helping some as the number of incidents this week was fewer and we did get home in time.

In other news just had a tussle in the kitchen over Kool-Aid. She went to get some for herself which would have been fine four days ago but now we have to do the thickening thing. And hoo-boy she did NOT want to do that at all. Are there such things are refrigerator locks? But if I do that she can't get herself breakfast or lunch. At a loss as to how I am going to finesse this mess.

But the small victory today is that we got home in time.

I'm so sorry you're dealing with C-diff as well as everything else. Our daughter had C-diff after a dental surgery and a round of Clindamycin antibiotics - one of the biggest culprits for inviting this infection.