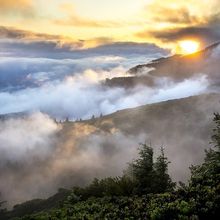 Anxiety /aNGˈzīədē/ noun 1. a feeling of worry, nervousness, or unease, typically about an imminent event or something with an uncertain outcome 2. desire to do something, typically accompanied by unease 3. a nervous disorder characterized by a state of excessive uneasiness and apprehension, typically with compulsive behavior or panic attacks.

The last two weeks have been amazing for me. I went to see my parents a couple of times, took my dad shopping once, but otherwise, I was taking some ME TIME. This was real "me time" with no guilt whatsoever. I didn't watch the grandchildren, only called my parents a few times, and didn't even help much with housework. I sat at my desk for hours, working on little books to sell for Valentine's day and I finished reading "The Big Over Easy", an NCD (Nursery Crime Division) detective novel. The last was such a delight as it's the perfect book for a retired kindergarten teacher: Detective Jack Spratt and Sgt. Mary Mary investigate the murder of Humpty Dumpty. Why did they find a 28 ft long auburn hair in Humpty's office? Did Wee William Winkie see something after he finished his shift?

Of course, I was also often in a great deal of pain but the kidney stone eventually passed and I'm better now. It had thrown my Parkinson's off and I had absolutely no stamina during those two weeks. It was wonderful!

I had a lot of time to just be. I thought about how nice it was to have a break from caregiving, though it was truly more of an emotional break. The nurse still called to let me know what meds they needed and that my mom needed to be seen by a doctor soon (coming on Monday). I still picked up the meds and delivered them. Somehow, being ill myself gave me permission to step back. The view is amazing when we step back.

I became aware of the high expectations we have for ourselves in our emotional life. Be positive. Be strong. Be happy. Take care of our families. Take care of ourselves. We're not supposed to hide our emotions, but we're not to get stuck in them. No whining, no negativity. Being able to handle our emotions perfectly is equivalent of having the perfect physical body. Neither is possible, as least for any length of time.

No wonder anxiety is such a huge issue.

It's what my mother deals with on a daily basis. Her doctors dealt with it by putting her on Valium. She dealt with it by staying on Valium for 45 years. I know why. She was never allowed to go through the emotions after giving up her first child for adoption. I have known this for a long time but am just beginning to understand the social expectation to be emotionally strong. I'm beginning to appreciate just how difficult a journey she's had.

My daughter battles anxiety issues after having had so many medical issues early on in her life. She faces them head on. She doesn't use medication at this point. She has talked with a psychologist and gotten some good advice and good tools. Thank you to Shriners Hospital for that gift! I don't think Mom ever had anyone give her advice and tools to work with her anxiety. Instead, she became addicted to Valium.

What would have happened if she'd been treated differently? What if there hadn't been such a culture of secrecy? What if she could have grieved instead of just being told to accept and move on. Be strong.

I'm learning to accept that, even at age 86, Mom is still a work in progress, as we all are.