0
IT'S THE ONE WITH SAUERKRAUT ON IT!

Backing up, I really blew it this weekend. I felt like a terrible daughter, mother, and grandmother. After finding out about our hail damage and the amount of our deductible, I impulsively decided to have a yard sale this weekend to try and sell the stuff from my parent's storage unit. I totally forgot about Mother's Day and my parent's 62nd anniversary.

Making a long story with plenty of slapstick comedy and absurdity, much shorter, we ended up inviting Mom and Dad and all the kids and grandkids over for Sunday lunch. We would end our sale at noon on Sunday and haul everything down our long, long drive way to the garage and leave it outside next to Mom's sacred, though worthless, 1985 Buick Skyhawk. With a little bit of luck, it would be hidden enough, she would not know we had been getting rid of her hoarded treasures - most of which were bought from garage sales in the 1970's, 80's, and 90's. With a little more luck, maybe we would sell it all on Saturday.

We did not sell it all on Saturday. Hours of preparation and sitting and chatting with customers yielded a $48.00 profit. Not that it was a waste of time, in a city as large as ours, it was such fun to have a former colleague, a former school parent, and a former student come by to say hello! Even on Saturday, we kept prices very low. In fact, the first two customers insisted on paying me more than what I asked. On Sunday, everything was free. It was so delightful to see someone pick up a linen towel with Amish designs and sayings and a sort of matching coffee mug, saying she knew her mom was going to love them. Another woman took a small, rolling kitchen cabinet to but in her tiny apartment. Things which had sat in a dusty storage unit for 3 years were now going to be used. We didn't give it all away, not by a long shot, and so, noon came and we hauled it down to the garage end of the driveway.

Lunch -- we had frozen pizza and a wonderful beet salad. We did the pizza and our daughter-in-law made the salad. Mom and Dad weren't ready at 1:00, so we waited for their call and picked them up at 3:00. They ate and chatted and seemed to enjoy themselves. Then Mom wanted to walk down to see her car. RED ALERT! RED ALERT! DIVERSIONARY TACTICS!

And then our son walked in the door with his son and started a whole new conversation with his grandparents. I could've kissed him. I went outside with our grandson, who was getting antsy, and whispered to him that even grandmas need to escape now and then. We had a marvelous conversation and suddenly my husband was walking Dad out to the car. The great grands were ready to go home. It was 5:30 pm and we had successfully gotten through the celebration without mishap. Everyone had a good time.

We were almost to their facility when Dad asked if they would be home in time for dinner. Mom said SHE wasn't hungry and wasn't going to dinner. Anyway, she said, it was too late. Dad was hungry. Could they stop and pick up some sandwiches on the way? Sure, I told them, and asked what they wanted. Mom wanted to stop at Arby's.

"You know what sounds 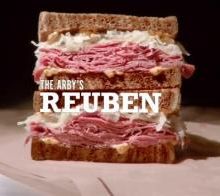 good to me? A Reuben sandwich."

"You know, it's the one with sauerkraut on it," Mom replied. "What do you want?"

"A REUBEN!" sputtered Mom (it's hard to shout with false teeth).

It went on like this while I back tracked to the nearest Arby's (half mile from our house) and bought their sandwiches and milkshakes. Back to the apartment. I sat with them for awhile and watched as Dad attempted to eat with his overbite dentures. It was obviously not easy, but he ate about half his sandwich. He goes in a week from tomorrow to see a dentist that specializes in dentures. Mom took one bite of her Reuben. I know what's going to happen.

In a day or two, Dad will see the sandwich in the fridge and asked Mom what it is.