When It's Not a Giving Fest

When It's Not a Giving Fest 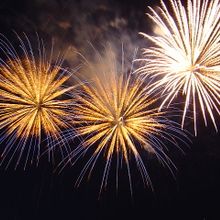 Well, the weekend wasn’t exactly the giving fest I envisioned in that earlier post. We did do a ”fireworks” craft for both my mom and my sister (and my husband, who is working away from home for seven weeks – we saw him fleetingly last night and this morning and forgot to give him the painting).

I didn’t do the meal because my mom said her stomach has been bothering her – dry heaves two days ago and just general nausea since. So, we ate out for lunch today (tacos for her, which seems to go against the stomach thing, but hey, she is her own person) and had a pasta salad that my sister made and sent down yesterday (which was delicious). My husband, daughter and I went to breakfast and it wasn’t very good, so that was disappointing.

My dad has officially started hospice and his care seems better, but he is pretty non-responsive (partially medication – he is on haldron (sp?) and lorazepen to keep him cooperative, but also partially because his cognitive function has declined a lot). My mom has decided to bring him home at the end of the month, which means cleaning out a bedroom for a caretaker, which is going to be stressful…for everyone involved.

My mom is horrible about cleaning out things. She will also need to do some rearranging/cleaning out in the family room where they will put my dad. This is going to be tough on her mostly, but with her indecisiveness and general pessimism combined with procrastination, it will be very tough on all of us.

She is coming home with me tonight and spending until Wednesday with us, which is good for her I think. I know she feels guilty about being away from my dad, but he doesn’t really recognize her and the caretaker goes and checks on him twice a day when my mom is gone and she just sits around here making herself miserable. At least she is somewhat distracted at my house.

I am having a tough couple of day--feeling a little sorry for myself, a little overwhelmed (with this situation, finances are tight right now, we are having car issues, etc.) and just a general lack of zest for life. I think part of it was being alone with my daughter on the Fourth and not doing anything holiday related really and part of it is that I want our lives to be different, but I don’t know how to get there.

Anyway, that is that. My update. I want to start blogging more often, but I’ve been somewhat uninspired.

I'm glad you feel better now that you're home. I feel your pain, though. I can understand the wish for different and the frustration about not knowing how to do that. \r\n\r\nSo, I wonder: What could change that would make your day feel a little easier?\r\n\r\nXXOO

Thanks Denise and Il! I am back home now, still feeling overwhelmed, but always happier on my \"home turf\". :)

My turn Denise . . I applaud you for being there for us as well as everything you're doing. You need support too. Right over Left, Left over Right and squeeze. . there you have a hug!\r\nil