Wishing for a UTI !

Wishing for a UTI ! 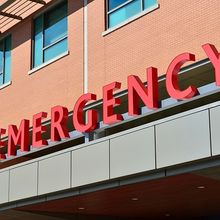 Yesterday I took my husband to the emergency room. His symptoms were dramatic and came on quickly. If tests failed to find an identifiable reason for symptoms it meant that his FTD was progressing and that would not be good news. They could not identify anything to treat. They ran quite a few tests. The doctor said he was hoping to find a UTI. Me, too! I brought Robert home and we began the process of adjusting to our "new normal". This new normal means he is even less ambulatory, less mentally acute, less patient with his challenges and more defeated than a few days prior to our hospital visit.

Frontotemporal Degeneration/Dementia manifests in so many ways and symptoms come and go. The one truth is that, as time passes, the good times will shorten and the difficult times will lengthen. Out of all we have been told about this elusive dementia this truth has been consistent. We are in the shorter good and longer difficult part. This disease, like so many, does not go backward. Neither does it necessarily speed up. In our case, it has been as slow as a pot-smoking turtle on a mellow turtle day. (Jeez, where did that come from?)

It is this trend towards a slow transition that changed this time. Robert went from managing to get himself from his room to the living room and back to not being able to take two steps without falling to might be able to take a few steps. His thinking is less clear and his memory is much shorter. But this all happened like a sudden and not yet expected snow storm. Once again, FTD has won the day and caught us up, one more time, in the guessing game.

He has had many urinary tract infections. I never thought I would wish for one but I wish this were one. I don't suppose we are ever ready for the gaps to widen and the ground to shake beneath our feet. Terminal illnesses do not run in straight lines or on schedules. Even with our best efforts, it seems FTD is mocking us. Our response time is better. We broke out the wheelchair, adopted a new pattern of getting in and out of bed and told all the appropriate medical professionals. In the strangest of ways, we work this out together. Robert gets discouraged to the point that he believes he cannot bear another moment and I get exhausted and burnt out. I believe God is gracing us with a measure of grace that goes beyond anything I have experienced to this point in my life. I have, at times, referred to similar times as God's Anesthesia. I think we are living in the grace of a God who is numbing us up a bit to help us find our way. I believe He loves us gently in the face of this awful, chaotic disease.

But, I still wish Robert had a UTI.

Lark, I pray for you as I do for myself Lord give me the grace to run this race.

I wish it was a UTI too. Love you.